If you sail the Florida Keys, you'll see him one day. He'll be sitting in a laid back bar somewhere on the water, his beer belly stretching the buttons on a well worn, salt seasoned shirt. His sandy beard will be as unkempt and peppered with gray as his hair. On first glance you'll pass him off as a n'er do well, one more veteran of the army of cultural drop outs you always find in places like this. But if he catches your eye he'll ask you where you're in from. He'll ask you in that special way that sailors use as an invitation to talk about things nautical.

Before you know it you're sharing with him your full sailing history. And every place you've been he's been there, too. The boat talk will continue and as the ice melts in your drink, you'll notice something special about this man that you hadn't seen before. Maybe it'll be the sparkly in his eyes as he comments with a slow Savannah drawl on the itinerary you've just told him about. Maybe it'll be the soft, easy going manner that seems continually interested in where you've been and what you have seen there. It could be a joke he cracks with a Bahamian accent as authentic as any in Nassau, or a story of a passage so scary that it stops your heart. But whatever it is, when the conversation is finished you'll feel good about yourself, you'll feel good to be in the company of sailors like him.

Before you leave, you'll offer him your hand and tell him your name. He'll take it and shake it with a hand as big as a bear and with a smile as wide as the Gulfstream he'll say, "I'm Frank Papy." As you walk out of the bar, the name will haunt you. You've heard that name before but you don't seem to be able to place it. Then, days later as you pull out the little book that has been your cruising bible and you check for the third time the approach to Moser Channel, you see the name. "It's him!" you'll cry out to the crew. "The guy in the bar. It's Frank Papy, the guy who wrote the book."

For thousands of people who have sailed the Keys, Frank Papy is the guy who wrote the book. His "Cruising Guide to the Florida Keys" has been the final authority on the tricky job of navigating the one hundred fifty mile stretch of archipelago that stretch south and west of mainland Florida. For over twenty years through his book Papy has kept "pilgrims" off the sand bars and coral reefs. He's detailed anchorages and warned about currents. He's outlined the best snorkeling spots and even furnished recipes on conch food from fritters to chowder. For thousands of Florida's sailors he has been the sailing equivalent of Dr. Spock, providing information that makes cruising these water a far better and certainly less frightening experience.

But for all that he's done, his best lessons have gone untold. With the exception of those fortunate enough to spend a night or week or a month in his company. The real guide to Frank Papy's Keys has yet to be shared, because for Papy the real Keys are much more than a place. they are a state of mind. They are the subtle combination of history and harmony. A place so spiritually removed from the mainland and the mainstream that it bears no resemblance to anything familiar. A world far different from any other place you have ever been before.

If I could grant one wish to all those soon to be Keys sailors, it would be to have the experience that I've had. To sail the Keys with Papy and hear endless stories of the place he loves and knows so well, told in the voice of one of the last truly authentic sailors.

So sit back, pour yourself a rum punch and listed to the story of the Keys the way Papy would tell it if he were sitting in the cockpit next to you. If you listen carefully, you'll discover, as I have, a place so wonderfully exciting that you wonder how it still exists.

"Cruising Guide to the Florida Keys"

Available on Kindle via Amazon $9.95 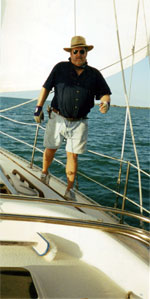 Cruising Guide to the Florida Keys

and other writings by Capt. Frank Papy